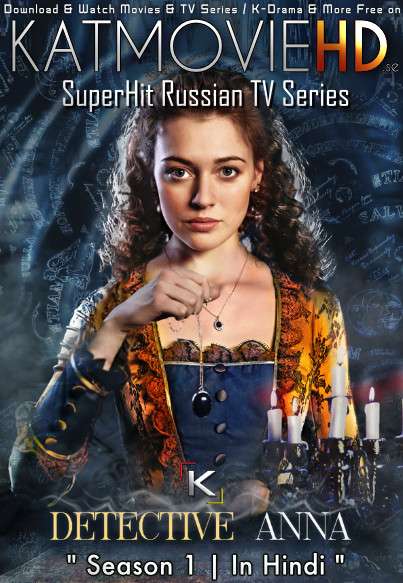 Note: More Episodes of Detective Anna: Season 1 [Hindi Dubbed]  Will Be Added Soon…
So Stay Tune With Us &…Follow Us on TeleGram .

Nineteen-year-old Anna, living at the end of the nineteenth century in the town of Zatonsk, unexpectedly discovers that she possesses supernatural powers. The spirits of the dead literally haunt her, begging to help. Aided by her visions, Anna manages to investigate and solve a number of mysterious crimes which have baffled the police. An experienced detective, 37-year-old Yakov Shtolman, who is assigned to the police department and teams up with Anna and becomes her partner in hunting down criminals.

Detective Anna (original title Анна – Детективъ) was a 2016 – 2017 Russian period detective/fantasy series about a young woman (Aleksandra Nikiforova) who discovers that she can see and communicate with the dead. She uses her powers to help a detective (Dmitriy Frid) solve crimes in their 19th century Russian village.

I’m obsessed with this show. This is a mystery murder-of-the-week show, but it’s really about the relationship between the two main characters – Anna, a young woman who sees ghosts/spirits, and Yakov, the police detective. I also liked all of the other regular characters – Anna’s family, the detective’s assistant, the neighbor, the newspaper reporter, the police chief, etc. I don’t know much about 19th century Russian life, but the show very effectively conveys a sense of a previous era. Also, I love Anna’s beautiful dresses. She seems to have at least one new one each episode. I’ve watched all 56 episodes… more than once.