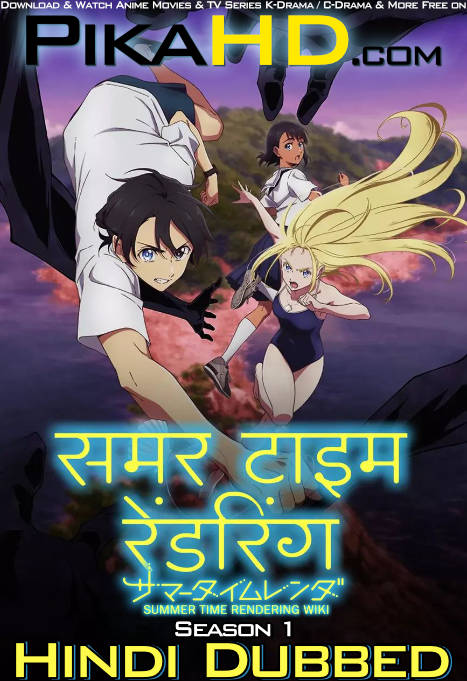 SummerTime Rendering (TV Series 2022): Following the death of his parents, Shinpei Ajiro grew up with the Kofune sisters Ushio and Mio before heading to Tokyo to live alone. Two years later, he returns to his hometown of Hitogashima Island, Wakayama Prefecture to attend Ushio’s funeral following news of her drowning. However, Shinpei becomes suspicious when he receives news of strangle marks around Ushio’s neck, implying that she was murdered intentionally. Now haunted by her “ghost” and assisted by Mio, Shinpei tries to find the answers to what really happened to Ushio and possibly save the residents from a strange dark enigma.

Since the death of his parents, Shinpei Ajiro had lived with the Kofune family and their two daughters—Mio and Ushio. Although he then left his home island to continue his education in Tokyo, Shinpei returns after Ushio tragically drowns during the attempted rescue of a little girl. During the funeral, his best friend informs him about bruises found around Ushio’s neck, casting doubt over the cause of her death.

Suspecting a murder has taken place, Shinpei reevaluates recent events, but strange incidents only continue to transpire. Disappearing people and other unexplainable occurrences lead Mio to recall an old folktale referring to entities called “Shadows,” which may not be entirely fantasy. Supposedly, an encounter with one’s Shadow foretells the person’s impending demise.

Facing the dark side of Hitogashima Island, Shinpei stands against his grim fate to fulfill Ushio’s final will—to protect Mio.

Summer Time Rendering (Japanese: サマータイムレンダ, Hepburn: Samā Taimu Renda) is a Japanese manga series written and illustrated by Yasuki Tanaka. It was serialized on Shueisha’s digital magazine Shōnen Jump+ from October 2017 to February 2021. An anime television series adaptation by OLM aired from April to September 2022. A live-action film, a real escape game, and a video game have also been announced.

The animation was pretty good throughout, with its vibrant, yet dark undertones, and great sakuga in the fight scenes. The OP and ED in the first half of the show were very creative, and I enjoyed those two a lot, and the OP and ED in the latter half felt more “normal”, but had some emotional weight in the final episodes. The soundtrack throughout matched well with the show.
Believe it or not, I was never wholly invested in the characters, because their overall development wasn’t that strong, but every character had their share of good moments. Shinpei is a decent protagonist, not the dumbest you can imagine in stories like this, as he tries to decipher mysteries and control his powers, but still makes questionable decisions, like telling the villains too much information, for example. He’s quite the dumb one at the beginning, but I’m glad he developed a sense of awareness and became a much more likeable protagonist near the end. Ushio was a strong character, but she was also the character who contributed to the most tonal shifts due to her bubbly personality, leave it to her to make a joke in a tense moment. Won’t spoil much more about the characters, but Mio, Haine, Shide, Hizuru, and others all had their moments of emotional weight and badassery to impress me.

The horror and suspense elements were done rather well, as the eerieness and quietness of some scenes really had the edge of your seat, as the show waits for the perfect moment to cut that silence. The nightmare fuel wasn’t cut, and there was a lot of vivid imagery for sure, which is always welcome. There were some themes that were unnecessary, like some of the comedy, and the shots of fan service as well.

A quality show that I believe most people would enjoy, which is why it really was a shame that this show was locked behind Disney jail, which limited a lot of the discussion that could have been intriguing. It has its share of convolutions and shock factor that didn’t feel very strong, but if you’re looking for an action and mystery series, this one would be a decent one to pick.